Foreign Ownership in the Philippines

The Foreign Investments Act has liberalized the Philippine economy and opened the doors to foreigners in most areas of investment especially those areas which “significantly expand livelihood and employment opportunities for Filipinos; enhance economic value of farm products; promote the welfare of Filipino consumers; expand the scope, quality and volume of exports and their access to foreign markets; and/or transfer relevant technologies in agriculture industry and support services.

Within the 1991 Foreign Investment Act (FIA), there are two negative lists also know as the “Foreign Investment Negative List” which defines the foreign investments which are limited or restricted by the Philippine constitution and specific laws.

a.  List A covers areas of activities reserved to Philippine nationals by mandate of the Constitution and specific laws.

b.  List B covers the areas of activities and enterprises regulated pursuant to law:

1.  which are defense-related activities, requiring prior clearance and authorization from the Department of National Defense [DND] to engage in such activity, such as the manufacture, repair, storage, and/or distribution of firearms, ammunition, lethal weapons, military ordnance, explosives, pyrotechnics, and similar materials; unless such manufacturing or repair activity is specifically authorized, with a substantial export component, to a non-Philippine national by the Secretary of National Defense; or

2.  which have implications on public health and morals, such as the manufacture and distribution of dangerous drugs; all forms of gambling; nightclubs, bars, beer houses, dance halls, sauna and steam bathhouses, and massage clinics.

There are different types of company formation which a foreign investor may choose from in setting up his business in the Philippines – a branch, corporation, a representative office, or regional headquarters. One important consideration to company formation is legal liability. A domestic corporation limits potential legal liability of the parent company because it acquires a juridical personality distinct and separate from that of its parent or shareholders. In contrast, a branch merely becomes an extension of the parent company and for purposes of investment law is considered fully foreign-owned.

If your future company in the Philippines is a domestic corporation (subsidiary) or branch office exporting goods or services or generating revenue from abroad amounting to more than 60% of its gross sales, it can be fully foreign-owned, as it is considered an Export Enterprise under the Foreign Investments Act. Both branch and domestic corporation options can be registered with as little as P5,000 paid-up capital.  However, most banks require P25,000 – P50,000 to open a corporate bank account.

Most all foreign-owned “cost centers” such as call centers, contact centers, IT-BPOs, web development, and web design are eligible for classification as Export Enterprises and full foreign ownership. Some of these are even registered with PEZA to avail of tax and other incentives.

The mining industry in the Philippines is regulated by the government and subject to foreign equity restrictions because of the Constitutional policy that mineral resources are owned by the State and their exploration, development, utilization, and processing are under the  its full control and supervision. The Philippine government may however directly undertake such activities or it may enter into mineral agreements with contractors, enter into co-production, joint venture, or production sharing agreements with Filipino citizens, or corporations or associations at least 60% of whose capital is owned by Filipinos with the other 40% foreign-owned. These agreements may be for a period not exceeding 25 years, renewable for not  more than twenty-five years, and under such terms and conditions as may be provided by Philippine law.

Online gaming operators must be compliant with the requirements in the CSEZFP Interactive Gaming Rules and Regulations and CEZA’s policies pertaining to the conduct of interactive gaming at the CSEZFP.

100% foreign ownership is allowed for Philippine retail trade enterprises: (a) with paid-up capital of USD 2,500,000.00 or more provided that investments for establishing a store is not less than USD 830,000.00; or (b) specializing in high end or luxury products, provided that the paid-up capital per store is not less than USD 250,000.00 (Sec. 5 of R.A. 9762). No foreign equity is allowed in Retail Trade Enterprises with less than the abovementioned capital.

With the help of the Joint Foreign Chambers in the Philippines, congress is debating whether to reduce the paid-up capital of USD 2,500,000.00 to USD 500,000.

InCorp Philippines has registered hundreds of local and foreign companies in the Philippines. Our full spectrum of corporate services is guaranteed to help you enjoy a seamless business registration process. 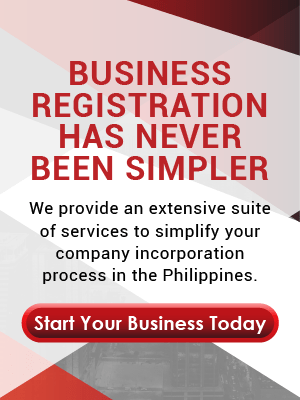